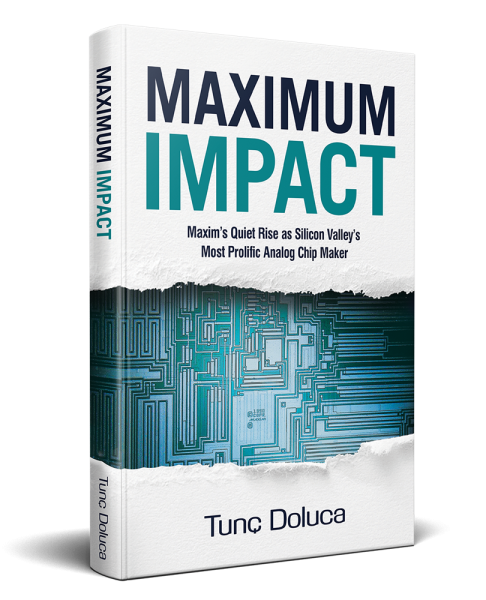 The Remarkable Story Behind the Early Years of Analog Tech Company, Maxim Integrated

“‘Maximum Impact’ captures a snapshot of the ‘characters of Silicon Valley.’ Jack Gifford was a model of knowledge, skills and abilities with a few quirks to go along! He and his team are some of the legendary Greats in the Valley.”

~ Rick Hill, Chairman of the Board
Marvell Technology Group

In “Maximum Impact,” the author takes readers on an exciting journey, with its cast of exceptional founders, through the turbulent early days of Silicon Valley and the building of a remarkable analog tech company, Maxim Integrated. Readers will enjoy this panoramic view, which traces the technological revolution that bold, charismatic Maxim Founder and CEO Jack Gifford embarked upon with his genius colleagues. This fascinating story about the growth of a semiconductor legend provides compelling insights into a company culture that helped create the phenomenal success of Maxim Integrated. In this book, readers will also discover powerful business keys that contributed to the quiet rise of Silicon Valley’s most prolific analog chip maker.

In 2009, many in the technology world, especially we at Maxim, were deeply impacted by the shocking news that the company’s founder and long-time CEO, Jack Gifford, had suddenly passed away. The world may know him as one of the “founding fathers” of the analog chip industry, but Silicon Valley and the wider tech biosphere know him for his most important legacy: Maxim Integrated, or just Maxim, as it is often referred to in The Valley. Jack built a company from the ground up to $2 billion in sales—a specialized integrated circuit innovator with an unparalleled string of ingenious products that include many thousands of cutting-edge microchip inventions. These accomplishments also provided income for tens of thousands of employees and their families over the years.

Yes, Jack was a tough manager who perfected the art of tough love. Many are the unique and legendary water cooler stories shared about him at tech companies in recent decades; and most are completely true. But very few individuals can claim to have left such a significant mark on so many during their lives as Jack did.

Tunç Doluca joined the Maxim Integrated team during the founding years and was part of the burgeoning semiconductor revolution in Silicon Valley. He has personally experienced Maxim’s amazing story and closely worked with the company’s first CEO, Jack Gifford, as both technical and executive leader. After Gifford handed the reins to him in 2007, Doluca began serving as the president and chief executive officer of Maxim. Over his career, he has designed more than 40 semiconductor products and registered 11 patents. Currently, Doluca serves on the boards of Maxim Integrated, the Semiconductor Industry Association (SIA), and Western Digital.

‘Maximum Impact’ provides a fascinating behind-the-scenes view into the creation of one of the most successful technology companies in history. Tunç Doluca captures the brash, courageous and often outrageous character of the founders of the early semiconductor industry.”
~ Matthew Massengill
Chairman of the Board
Western Digital Corporation

‘Maximum Impact’ is the story of a truly great Silicon Valley company and the visionary leader who made an enormous impact on the semiconductor industry during his storied career.”
~ Matt Murphy
President & CEO
Marvell Semiconductor

I have watched many electronics companies come and go. Maxim Integrated is one I have watched for a long time. ‘Maximum Impact’ is a great story that puts Silicon Valley’s rise into context and provides an inside look at Maxim’s growth and many challenges.”
~ William Wong
Senior Technology Editor
Electronic Design

This is my kind of book—it shows the highs and the lows, successes and stresses of Maxim in that highly competitive semiconductor business...for anyone interested in how a fledgling company pushes through its growing pains, endures challenges, and celebrates its people.”
~ Steve Taranovich
Senior Technical Editor
EDN Network, Analog and Power

“I look at Jack and Maxim as premier examples of what the semiconductor industry is really all about. I encourage anyone who is interested in how to start and run a successful company to read this great book.”